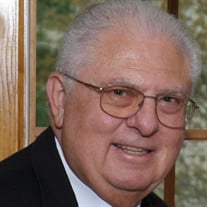 Robert John Landi passed away on Thursday, January 20, 2022, after a long battle with Parkinson's disease. He was 86. He leaves behind his beloved wife, Francine (Licciardi) Landi and daughter, Gina Sammarco, as well as her husband, Michael and the three grandchildren he adored: Sienna, Isabella, and Michael. He was predeceased by his Mother and Father, Ida and Renato Landi, and his brother, Richard Landi. Robert was born on November 8, 1935 in the Bronx. He attended Evander Child’s High School. He was in the Army Reserves for a short time and worked as a Boars Head distributor until retiring in 2004. After Robert and Francine married, they moved to Ardsley in 1972, where they lived happily for 43 years until moving to Newtown, CT. They recently moved to Hendersonville, TN to be close to their daughter and family, until his condition progressed. Robert was passionate about many things including great food, horses, hosting fantastic parties (he loved bringing friends and family together), playing cards, good wine and of course...the Yankees. He was a great and loyal friend and so enjoyed the time he spent with his childhood friends from the Bronx and others he met later in life. He was always there to help a friend in need. Francine took amazing care of Robert and theirs was a very special marriage. He tried so hard to get better for her, but he was so tired in the end from his long battle. He is at peace now with God. Robert will be greatly missed by his family and friends. He had an amazing sense of humor and liked to tease those he loved. That's how you knew he loved you:-). He was truly a wonderful husband, father and grandfather. We know he is already planning a party for when we all meet again! Friends may call on Friday, January 28th from 3-7pm at Edwards-Dowdle Funeral Home, 64 Ashford Ave, Dobbs Ferry NY. Mass of Christian Burial will be celebrated 10 AM on Monday, January 31st at Sacred Heart Church, Dobbs Ferry, NY. Entombment will follow at Ferncliff Cemetery, Hartsdale, NY. In lieu of flowers, contributions may be made to the Parkinson’s Foundation. https://www.parkinsons.org

Robert John Landi passed away on Thursday, January 20, 2022, after a long battle with Parkinson's disease. He was 86. He leaves behind his beloved wife, Francine (Licciardi) Landi and daughter, Gina Sammarco, as well as her husband, Michael... View Obituary & Service Information

The family of Robert J. Landi created this Life Tributes page to make it easy to share your memories.

Send flowers to the Landi family.