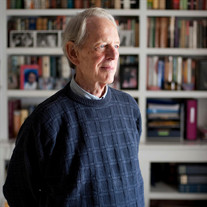 The family of Robert K. Massie created this Life Tributes page to make it easy to share your memories.

To view this article on the New York Times website, please visit...