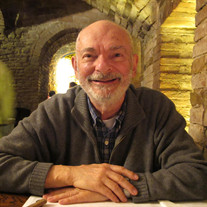 Robert Harris Schor of Hastings on Hudson, age 90, died peacefully at home on August 27, 2021. His beloved wife of 56 years, Lily, was at his side when he passed. He leaves behind his children Leslie Schor, grandchild Annabelle, and Dr. Mark and Dr. Daphne Schor and grandchildren Sam and Clover. Bob was the rare individual whose many interests led him to engage in a wide range of pursuits. He was born in New York City to Rebecca and Aaron Schor growing up in Maspeth, Queens. After receiving a BA cum laude from Queens College (CUNY) and an MA in English from Columbia University, he took a position as an instructor in English at Indiana University, Bloomington, Indiana. A true New Yorker, he returned to the City to become the Production Manager at Etched Products, NY. Taking his management skills in a different direction he entered the U.S. Customs Service where he rose to Acting Assistant Commissioner of Customs for the Port of NY. During his tenure he was elected president of the National/New York Customs Professional Association and was appointed Equal Opportunity Officer by the U.S. Commissioner of Customs. Bob enjoyed the challenge of organizing people to work together toward a set goal and to arrange the workplace so that it brought out their best. While at Customs Bob pursued two intellectual interests: psychology and law. In 1972 he earned a Law degree from Brooklyn Law School and was admitted to the Bar. In 1985 he earned a MA in Psychology from Beacon College, Washington, DC and a certificate of Psychotherapy from Temenos Institute, Westport, Connecticut. Putting his interest into practice he worked evenings as a therapist at the Community Guidance Center, NYC. On retirement from U.S Customs he went on to practice International Law with the firm of Barnes, Richardson and Colburn, NYC. On full retirement, Robert joined his wife Lily in their mutual love of art and took up painting. Together with a fellow artist and friend, Luis Pereleman, he promoted and expanded the Blue Door Art Association in Yonkers, NY. He served as Co-Executive Director for many years, helping the organization bring art into a community under served by the arts. Bob had a lifelong connection to the American clairvoyant Edgar Cayce and the Association for Research and Enlightenment, Virginia Beach, VA. He was one of the last persons to receive a life reading from Cayce himself. He wrote extensively about the impact of that experience. It drove his life long interest in man’s relationship to a higher being and the support and obligations that such a relationship brought. Bob is preceded in death by his brother Joseph and his sister Eleanor. Bob had a wonderful sense of humor and a great generosity of spirit. His extended family and many friends will miss him greatly. In his memory, contributions to the Blue Door Art Association and Gallery would be welcomed. https://bluedoorartcenter.org/ In Loving Memory of Robert Schor 08/27/21 Though his birth name was Robert he was definitely Bob to us all He was Bob the dependable always available at your beck and call He was a true gentle man with such a special soul He made everyone feel good he made everyone feel whole He was the most faithful husband who loved his Lily with all his heart He wanted always to be with her— it pained him to be apart And Lily was his devotee attending to his every need He knew when he married her that he indeed picked a good seed He was such a spiritual being who never lost his connection with the divine He was a man in search of meaning he was the bright light that always shines He was a jack of all trades English, Psychology, Law and Art He had a keen and open mind even more so, an open heart He was such a gracious host and a giver not a taker For him, conflicts were absolutely incompatible since he was the ultimate peacemaker He was a truly good man who will be remembered for just being good He brought such a bright light into this world by doing all that he could In fulfilling his life’s mission and changing the world while he was here Bob’s spirit will eternally be with us—- because the dear are always near Baruch Dayan Ha’emet—may his memory always be a blessing….. All my love, Karen Sokol

Robert Harris Schor of Hastings on Hudson, age 90, died peacefully at home on August 27, 2021. His beloved wife of 56 years, Lily, was at his side when he passed. He leaves behind his children Leslie Schor, grandchild Annabelle, and Dr. Mark... View Obituary & Service Information

The family of Robert Harris Schor created this Life Tributes page to make it easy to share your memories.