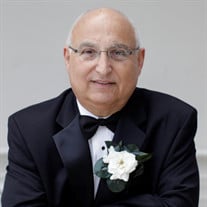 Ruben Furcayg passed away on April 9, 2020 of complications from COVID at Nyack Hospital in Rockland County NY. He was the son of Mayer Furcayg and Pola Drogociner, brother to Hana Furcayg Shaki. He is survived by his wife Lorraine Lubrano Furcayg, son David Furcayg, daughter in law Francesca Furcayg and beloved grandchildren, Matteo Andrew and Victoria Rose. Ruben was a kind soul and had a generous spirit. He was truly loved and is terribly missed. Ruben’s father (Mayer) sent his wife (Pola) with her family to Israel at the start of WWII while he stayed and fought for the Polish Army. After the war he found his wife in Israel and they immediately started their family. Ruben was born on February 28, 1945 in Haifa, Israel. After eight years they made their way to Germany via Italy and lived in the ghetto until Ruben’s father was able to go to America which was their final goal. He discovered that three of his sisters survived the war and were in America. The rest of his family perished in the war. His sisters were able to sponsor him and he left his family in Germany and sent for them after he procured a job, got an apartment in the Bronx and furnished it. Ruben was very proud of his father for not only setting everything up but doing it quickly. They started a new life in America where they learned the language, went to school, worked hard and became citizens. Ruben always had a love for electronics, especially the new technical miracle - the television. He went to Samuel Gompers high school where he studied his craft and upon graduation worked for a TV repair shop. Eventually he had his own TV repair business and he never looked back. He and his sister's husband, Steve Shaki, became partners; Ruben would do the service calls and Steve would stay in the shop and do the repairs. They became a Nutone authorized repair shop but it became apparent that with Ruben’s personality and love for people that sales was his true calling. The combination of his talent for sales and technical knowledge was a match made in heaven. He was hired by Nutone under the direction of his mentor Art Geller, then with Art’s blessing was promoted and moved to Boston to have his own sales territory where he lived for two years. Eventually he returned to New York after missing his family and friends and resigned from Nutone. Upon his return to New York he met and eventually married Lorraine Lubrano. A few months after his marriage he started a new company, Graystone Systems Inc. After a few years Steve Shaki became his partner again. Ruben and Lorraine had two children; David Paul and Andrea Helena. The only thing more important to Ruben than his business was his family. Devastatingly, Andrea passed away shortly before her 2nd birthday. At this time both his home and business were in Westchester and within months of her death he moved his family and business to Rockland County where they raised David. Years later Ruben sold Graystone to Elbex America and after a brief time at Elbex as their President he went on to be National Sales Manager of several global companies. Missing the passion of running his own business Ruben started his Rep firm naming it “Ruben and Company” which he had for over 30 years. David joined his company after college graduation and they were still partners until Ruben's death in 2020. David is continuing Ruben’s legacy running Ruben & Company. Besides his business and family Ruben loved to travel, go to concerts, the opera and Broadway shows. His love for people and his kindness were beyond words, Ruben did not enter a room; he was the room. His family has grown with the marriage of his son David to Francesca DiBenedetto in 2013 and continued to grow with the birth of his grandson Matteo in November 2016 whom he adored more than life and his granddaughter Victoria in May 2020 whom unfortunately he missed meeting by 4 weeks. The world lost one of the best there ever was. ZOOM WILL BE LIVE FROM 1:30-3:00 PM Join Zoom Meeting https://us02web.zoom.us/j/84870686831 Meeting ID: 848 7068 6831 Please text or WhatsApp Message Will Jacobson: (914) 357-3332 if you are having any issues with Zoom.

Ruben Furcayg passed away on April 9, 2020 of complications from COVID at Nyack Hospital in Rockland County NY. He was the son of Mayer Furcayg and Pola Drogociner, brother to Hana Furcayg Shaki. He is survived by his wife Lorraine Lubrano... View Obituary & Service Information

The family of Ruben Furcayg created this Life Tributes page to make it easy to share your memories.

Ruben Furcayg passed away on April 9, 2020 of complications from...