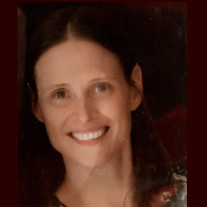 Sharon Propson died in her home on November 7th, 2020, in the company of her husband, her mother, her mother-in-law, and her two children. She was 44 years old. Born Sharon Marie Lulek on October 3rd, 1976 to parents Martin and Deborah Lulek, Sharon was a gifted, energetic, and gregarious child, a lover of the outdoors, a friend to outsiders, and an all-around fearless adventurer. She first lived with her parents at her beloved grandparents’ house in Detroit, where they welcomed her sister Kate into the world, later moving with her parents to Troy, MI. An accomplished swimmer and a Girl Scout, Sharon loved the ballet, and was an aspiring dancer herself. She attended St. Cunegunda in Detroit, MI for grade school, and then Bishop Foley High School in Madison Heights. In high school, Sharon excelled as a student, but made her mark in extracurriculars. She was head editor of the yearbook, a student journalist, and a spirited actress. But most of all, she was an exceptional friend. During those high school years, a small coterie of lifelong friends came into being, rooted in Sharon’s gentle but tenacious loving nature. It was then that Sharon entered into a relationship with her future husband, David Propson, whose sophisticated yet whimsical personality matched well with her own. Sharon graduated from Michigan State University, in East Lansing, MI, in 1998. She studied journalism at MSU, and worked as a reporter for the student-run Capitol News. During their college years, Sharon and David attended universities hundreds of miles from each other, but theirs was the rare relationship that endured such separation. After both moving to Manhattan for their first jobs (Sharon as a publicist, David as a journalist), the two lovebirds married in 2001, and took a bite out of the Big Apple. Through the next two decades, they would live in Queens, Hell’s Kitchen, Brooklyn, and their beloved Dobbs Ferry. In 2009, David and Sharon were blessed to welcome their daughter Penelope (Penny) into the world, followed in 2011 by their son Theodore (Theo). For over twenty years, Sharon was an Executive Book Publicist with Random House, a Penguin Random House division. A life-long reader and lover of story, Sharon was the ideal book publishing professional. Her admiration for the written word and her vivid understanding of storytelling helped catapult countless books into the zeitgeist, many becoming national and international bestsellers. Some of the authors Sharon worked with include: Lee Child, Sophie Kinsella, Sister Helen Prejean, Glennon Doyle, Jonathan Kellerman, Kelly Corrigan, Dr. Mona Hanna-Attisha, Piper Kerman, Melanie Benjamin, Jodie Patterson, Catherine Steadman, Gail Caldwell, Katie Arnold, Kate Hope Day, Margalit Fox and Jenny Rosenstrach, among many others. Sharon had an innate ability to build trust with her authors as they prepared their books for the world. She possessed a unique mix of tenacity, unwavering optimism, and deep empathy for writers and their stories. Her fierce determination to share information with the world brought some of the world’s most renowned authors to countless readers. Sharon was a consummate collaborator. She shared some of her most special gifts with her colleagues -- her passion, generous heart, boisterous laugh, her patience, and unwavering attention as she mentored and supported junior staff and colleagues. A steadfast cheerleader, her excitement and incredible energy were contagious. She was an essential member of the Integrated Marketing PR Department and will be deeply missed. Shortly after her 40th birthday, Sharon was diagnosed with breast cancer. Over the next two years, worries and treatments abounded, though Sharon faced these challenges with steadfast faith in God’s provision and determination to surmount any obstacle in her way. In the Spring of 2020, her doctors found that it had metastasized, worsening her prognosis. In the months that followed, Sharon navigated her family with tremendous wisdom and optimism through a maze of decisions, as she and David tried to make a way for their family through both cancer and a pandemic. When she learned that her death was imminent in early October, she approached her remaining days undaunted, joyfully welcoming family and friends, writing letters, listening to music, taking walks, and loving on her husband and children. She passed away on a Saturday, hardly a day removed from hosting friends and family in her front yard. No one who met Sharon can fail to be moved by her way of living life. She is joyful, accepting, sincere, curious, loving, and – as much now as when she took her first steps – adventurous. And she ventures on, no longer in November but eternity, no longer in Dobbs Ferry but the undiscovered country, where we hope to one day meet her again. Sharon is survived by her husband David Propson, children Penelope and Theodore, mother Deborah Lulek, father Martin Lulek, grandmother Opal Lulek, sister Kate Starosta, brother-in-law Dominik, niece Abbey, nephew Dash, and a large extended family. In lieu of flowers, memorial contributions can be made in Sharon's name to: Paint a Miracle 400 Water St, Rochester, MI 48307 (248) 652-2702 Susan G Komen 13770 Noel Road, Suite 801889 Dallas, TX 75380 1-877- 465- 6636

Sharon Propson died in her home on November 7th, 2020, in the company of her husband, her mother, her mother-in-law, and her two children. She was 44 years old. Born Sharon Marie Lulek on October 3rd, 1976 to parents Martin and Deborah Lulek,... View Obituary & Service Information

The family of Sharon M. Propson created this Life Tributes page to make it easy to share your memories.

Send flowers to the Propson family.