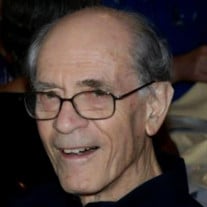 Sheldon Liftin of Dobbs Ferry (known by those who loved him as Shelly, Dad, Grandpa, Coach or Mr. Liftin) passed away Dec. 11, 2020, after several years of battling congestive heart failure. He was 89 years old. Born in 1931 to Minnie and Paul Lifshitz, Shelly grew up in “The Coops” in the Bronx. He attended Columbus High School and earned a football scholarship to Bowling Green State University. After receiving his undergraduate degree, he enlisted in the Army and served in Korea. He returned home in 1955 and fell in love with Phyllis Kirstein, whom he married in 1956. He completed his Master’s in Education at Washington State University and took his first teaching assignment in Michigan before returning to New York, where he taught for nearly 40 years, primarily at Dobbs Ferry High School. Together with Phyllis, he raised two girls, Denise and Amy, and was also seen as a father figure to the many students and athletes he mentored throughout his career. If Shelly met you, he remembered you. He knew who you were and what was important to you. He might have taught your brother, sister or father. He knew if you were a good student or someone who needed extra attention. And anyone who met him was touched by him. He was quiet and unassuming, but he was aware of everything. He was interested in what you were saying, in a way that made you know he genuinely cared about you. He found the good in everyone and cultivated each person’s uniqueness and potential. Many years later, people still remember the impact he had on their lives. He understood world events and was involved. He lived a modest lifestyle on a teacher’s salary, but always gave back to society supporting the causes of social justice, the environment, science and the arts. He exemplified values of diversity, equity, inclusion and fairness and pushed through boundaries of race and gender in sports, even when they were unpopular. He was ahead of his time. Early in his career, he loved spending time with his family at their summer house in the Poconos. Later, he used his summers off to travel with Phyllis throughout Europe and the United States. He always found time to stay with his girls in Boulder or Seattle. He was, of course, an avid sports fan. He followed most college and pro sports and rooted for the New York Yankees and Giants. He loved movies, the theatre and dining out with friends and family. Shelly will be greatly missed by his wife Phyllis; daughters Denise (Marc) and their children Daniel & Annie; Amy (John) and their children Josh & Jessica; and niece Elissa, (Simon) and their children Emma (Ben), Sarah Rose, and Julia. Due to world conditions much larger than all of us, we are not able to have a service now. We look forward to the opportunity to celebrate Shelly’s life at a gathering of friends and family in the near future.

Sheldon Liftin of Dobbs Ferry (known by those who loved him as Shelly, Dad, Grandpa, Coach or Mr. Liftin) passed away Dec. 11, 2020, after several years of battling congestive heart failure. He was 89 years old. Born in 1931 to Minnie and Paul... View Obituary & Service Information

The family of Sheldon Liftin created this Life Tributes page to make it easy to share your memories.

Sheldon Liftin of Dobbs Ferry (known by those who loved him as...