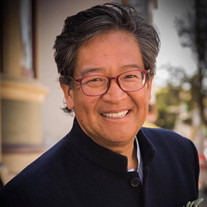 Stephen Diao 1961 - 2019 Stephen Diao, of Oakland, California, whose zest for life spanned almost six decades and who touched people across the globe, died peacefully surrounded by his loved ones on September 20 after suffering a stroke. He... View Obituary & Service Information

The family of Stephen Diao created this Life Tributes page to make it easy to share your memories.

Send flowers to the Diao family.