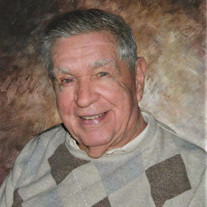 Stephen H. Hart Jr., 97 peacefully passed away on Tuesday afternoon, January 14, 2020 in Flower Mound, Texas surrounded by family. Stephen was born on March 31, 1922 in Dobbs Ferry, New York, son of Stephen H. Hart Sr., and Ethel D. Bishop. A resident of Irvington, NY from birth until 2007 upon moving to Texas. Alumnus of New York Military Academy of Cornwell, NY and Franklin and Marshall College at Lancaster, PA. Steve was a licensed commercial pilot and was active in the field of Aerial Photography. A WWII Veteran of the Army Air Corp where he served for four years as a pilot and was decorated for service in Europe while serving the 9th Air Force where he proudly served his country. Of honorable mention he had the honor of flying Generals Patton and Eisenhower. Following the war, he worked for Travelers Insurance until he established his own Insurance Agency. He married Rosetta C. Parent on Feb 8, 1950 in Yonkers, New York. In addition to serving his community and belonging to community services throughout his life, Steve joined Kiwanis in 1946 as a member of the Kiwanis Club of Irvington, NY. Steve’s dedication to Kiwanis promoted him to President of the Irvington Kiwanis Club in 1954, then ending his formal service to Kiwanis as Vice President International. As a Kiwanian Steve never failed to serve whenever asked by club, division, or district. Steve was a very humble, generous man taking great care of his family and community. His sense of humor, honor, loyalty, and love will be deeply missed. His loving wife Rosetta preceded him in death on August 11, 1999. He is also preceded in death by his sister Betty Roberts, daughter Catherine Hart Hughes, and Grandson Stephen Thomas Hughes. He is survived by: Daughters: Deborah (Walter) Rachiski; Nancy (Steve) Knortz; Sharon Merriman; Son: Stephen H. Hart, III; 10 grandchildren and 8 great grandchildren, nieces Nancy (Jeff) Rolfe; Susan Lynne (Butch) Weaver and nephew Garry Roberts, Sisters-in-laws Kaye (George) Battaglia; Gayle Parent, and loving nieces and nephews. Friends may call from 5-7PM on Tuesday at Edwards-Dowdle Funeral Home, 64 Ashford Ave., Dobbs Ferry, NY. Funeral and Entombment will take place 1PM on Wednesday at the Ferncliff Cemetery Chapel, 280 Secor Rd., Hartsdale, NY 10530. In lieu of flowers donations can also be made to Kiwanis or St Jude Childrens Research Hospital in loving memory.

The family of Stephen H. Hart Jr created this Life Tributes page to make it easy to share your memories.

Send flowers to the Hart family.