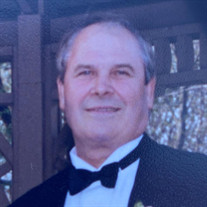 Stipe Rancic of Irvington, NY, passed away peacefully on Easter Sunday, April 4th, 2021, at the age of 82, surrounded by the love of his family. Born in Budimir, Croatia, he was one of seven children in the remarkably close family of the late Kata and Ivan Rancic. Stipe immigrated to France as a noticeably young man, leaving his family behind in search of a better life. He immediately mastered the French language and achieved success working as a division manager at an aviation company. After working in Paris for five years, he immigrated to the United States and soon met and married his beloved wife Martha. They had two daughters and were very devoted to them. Stipe spent many years working in the heating and cooling business and was always very entrepreneurial in nature. He had tremendous interest in the real estate market and eventually started his own firm in the 1980’s and successfully ran it for over 30 years. Stipe often spoke of how much he loved his homeland of Croatia and was equally vocal about the tremendous opportunities he was afforded in the United States. He lived the American dream and loved this country with all his heart. Known for his tremendous work ethic and perseverance, Stipe was also dependable, honest and generous. He worked long hours but always made time for his family and was willing to lend a hand to those in need. He was principled, trustworthy and always strived to do the right thing. Stipe truly lived his life by example. Family and friends sought him out for his good counsel and he was respected by all in the community. Stipe adored his family and especially enjoyed spending time with his wife and daughters. In his spare time, he loved to read and was especially fond of the New York Times. He loved being at home with his family, making repairs around the house and tending to an expansive garden where he grew tomatoes, radicchio and other vegetables. Stipe appreciated the company of family and friends. All were welcome in his home and there were many wonderful memories of late night conversations, laughter, and delicious home cooked meals. Stipe had a deep devotion to God and his faith. He was an active parishioner of Sts. Cyril & Methodius and St. Raphael’s Church in New York City, Immaculate Conception Church in Irvington NY and when he was in Florida over the winters, he worshiped at St. Patrick’s Catholic Church in Jupiter. Stipe was predeceased by his beloved wife of more than 50 years, Martha Rancic, by his brother Slavko and by his two sisters Nevenka and Andelka. He leaves behind his two daughters and their spouses- Lillian and her husband John of Saddle River, NJ and Catherine and her husband Remus of Pearl River, NY. Stipe was also the proud grandfather of five- Gabriella, Jack, Matthew, Peter and Luke. He is also survived by his two brothers Dragan and Mirko, by his one sister Danica and by many nieces, nephews and extended family. Mass of the Resurrection will be held Friday, April 9th at 10:30am at the Roman Catholic Church of Sts. Cyril & Methodius and St. Raphael in New York City. Visitation will be held Thursday, April 8th from 4-8pm at Edwards Funeral Home, Dobbs Ferry. Flowers may be arranged in tribute. Alternatively, memorial contributions may also be made in Stipe’s memory to the Alzheimer’s Association www.alz.org or to the American Cancer Society www.cancer.org.

Stipe Rancic of Irvington, NY, passed away peacefully on Easter Sunday, April 4th, 2021, at the age of 82, surrounded by the love of his family. Born in Budimir, Croatia, he was one of seven children in the remarkably close family of the... View Obituary & Service Information

The family of Stipe Rancic created this Life Tributes page to make it easy to share your memories.

Stipe Rancic of Irvington, NY, passed away peacefully on Easter...

Send flowers to the Rancic family.