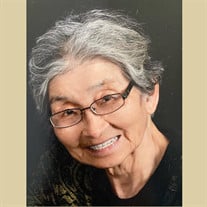 Sumi “Mary” Mitsudo Koide, MD, of Dobbs Ferry, NY and summertime resident of Woods Hole, MA, passed away peacefully on February 15, 2021 surrounded by her family. She is survived by her husband Samuel, sons Mark (Karen Li) and Eric (Ling Chen) and six grandchildren, Jennifer, Thomas, Theodore, Yuki, Sachi, Kinu and Akira. She was predeceased by her daughter Sumi Lynn. “Though she be but little, she is fierce.” No words better describe Sumi. Known as Mary to her family, she was born on October 22, 1929 in Longview, WA. She was the youngest child of Asa and Sotaro Mitsudo, a farming family in the Puyallup River valley. She and her family were incarcerated from 1942-1945 at the Minidoka Relocation Center in Jerome, Idaho. Undaunted by this experience, Sumi graduated from Swarthmore College and the Women’s Medical College of Pennsylvania. Dr. Mitsudo, as she was known professionally, was a long time staff member of Montefiore Hospital’s surgical pathology service and a Clinical Professor of Pediatrics and Pathology at the Albert Einstein Medical School. Her specialty was pediatric pathology and most specifically Sudden Infant Death Syndrome. She coauthored dozens of academic peer reviewed publications in her field. She was active in many national and international societies in her field. She was a role model and mentor to many young female physicians just entering the medical field. Personally, Sumi was an activist and was deeply involved in many social justice groups, including national and local civil rights, women’s equity and social justice groups. She was a long time President of the Japanese American Citizens League (JACL) New York Chapter, and served on the Westchester Women’s Advisory Board. During the 1980’s, she was a leader in the national Japanese American Redress movement for World War II incarceration camps. In her position with the JACL, she was involved in many civil and women’s rights coalitions. Sumi was also very active in the Dobbs Ferry community. She was a long time member of the Board of Trustees of the Children’s Village and the Dobbs Ferry Community Hospital. She was active in the leadership of the League of Women’s Voters, the Dobbs Ferry Youth Services Council and the Dobbs Ferry Employment Service, among others. She was a long time member of the White Plains Unitarian Universalist congregation. In 2000, she was honored with inclusion in the Westchester County Women’s Hall of Fame. Her family asks that in lieu of flowers that donations be made to the Westchester Fund for Women and Girls W141 at the Westchester Community Foundation in her name https://ssl.charityweb.net/nycommunitytrust/. A private service will be held online on Saturday February 27 at 3:00pm.

The family of Sumi “Mary” Mitsudo Koide, MD created this Life Tributes page to make it easy to share your memories.