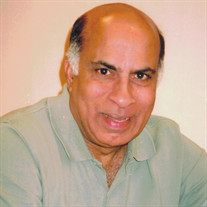 Mr. Thiruvilwamala Ramachandran (known as “Ram” or “Chandru” to many) of Scarsdale, New York, passed away at the age of 83 on March 22, 2022 at Calvary Hospital in Bronx, New York. He was born in Ernakulam, India, to Subhalakshmy and T. V. Harihara Iyer. After completing his studies in Kerala, he worked in Delhi and Mumbai before emigrating to the United States in 1966. Fifty-three years of his career were devoted to Air-India. For most of that time, he served as a Flight Dispatch Manager in Operations, John F. Kennedy Airport in New York. He spared no efforts to help anyone who came his way, and his every breath was defined by generosity and selflessness. He was an avid sports fan and had a rabid appetite for news about politics and current events. He enjoyed classic pop, early rock, and big band music, and found calmness and peace from listening to Hindu chants. He was well known for his hospitality, and a visit to his house would be incomplete without tasting his delicious masala dosa. He is survived by Kamala, his wife of 45 years; his son Vijay, daughter-in-law Emily Johnson, and granddaughter Iris (whom he affectionately called his princess), of Hamilton, New York; his sister Saroja of North Caldwell, New Jersey; and, sister-in-law Parvathy of Roslyn Heights, New York. He will be deeply missed by his large extended family and his many friends. Arrangements are entrusted to the Edwards-Dowdle Funeral Home in Dobbs Ferry, New York. In lieu of flowers, a tribute gift may be made to the Crohn’s & Colitis Foundation in memory of Mr. Thiruvilwamala Ramachandran.

The family of T.H. Ramachandran created this Life Tributes page to make it easy to share your memories.