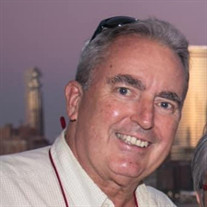 Thomas Patrick McLoone Tom McLoone, who lived his life to the fullest and had a vivacious spirit, charisma, and wit, died suddenly and unexpectedly September 12, 2021. He was 66. Born Thomas Patrick McLoone on December 25, 1954 at St. Catherine’s Hospital in Brooklyn, NY to Thomas and Patricia McLoone, Tom was a life force from the beginning. He had a history of being late and a flair for the dramatic which started at birth - he was due on Thanksgiving and born on Christmas Day. He was often told that he would be late for his own funeral and that day has come all too soon. He loved celebrations and exhibited a generosity of spirit; it was only fitting that his birthday was also a global day of celebration, family, and giving. Tom prided himself on his giving nature and had a reputation for giving the most generous, surprising, and thoughtful gifts. An obituary is a story that reflects the heart and soul of who someone was, and the irony is that Tom was the ultimate story-teller. No one could tell his story, or any story, better than he could. He was never short on tales to tell or recollections to share. He had the Irish gift of gab and a knack for capturing the spirit and essence of a moment. Tom was a sports enthusiast and was drawn to the human elements of sports – the motivating factors, the spirit of competition, the sense of purpose and emotional charge it gave whether as a player or enthusiastic fan. He loved reflecting on how important sports were throughout his life from CYO to Chaminade High School, where he returned as a soccer coach in later years, to Hamilton College, where he played varsity soccer. One of Tom’s other passions was food and cooking, which was a natural extension of his love for everyday and celebratory life. For him, meals were an opportunity for togetherness and sharing. One of Tom’s life mottos was “Céad Míle Fáilte", Gaelic for one hundred thousand welcomes. He was a renowned entertainer and brought the party wherever he went. He always showed up with a cooler filled with culinary delights, wine samples, and his own set of cooking utensils. He was the last to finish a meal because he was making sure everyone’s plate was full and palates were satisfied. It was Tom’s love of cooking, culture, and human connections that inspired him to pursue his lifelong career as a successful restaurateur and wine sommelier. He started as a busboy at Westbury Country Club in his teens and later ran Cantina in Westchester and New York City for two decades before joining Della Femina restaurants. Tom ended his career at Club Metropolitan in New York City before retiring in 2019. Tom’s dedication and love for his work led him to his other love, his wife Sylvia. They met while Tom was managing Cantina Restaurant and were married in 1993 at Church of the Blessed Sacrament in NYC followed by a reception at New York Athletic Club, where Tom was a member for many years. Tom and Sylvia shared a mutual love of life’s simple pleasures – a well-cooked meal, Giants, Islanders, and Yankees games, first blooms in their garden, boat rides in Saratoga Springs, day trips to Jones Beach, and beautiful sunsets over the Hudson River Valley. Tom and Sylvia’s two children Liam and Dylan were the true loves of their lives and sources of great pride. They both inherited Tom’s sharp intellect, logical thinking, and keen sense of humor. Tom loved to laugh, often at himself, and had an abundance of joy in his heart. His life was a testament to his deep love of family and friends. “Until we meet again, may God hold you in the palm of his hand.” Tom is survived by Sylvia, his wife of 28 years, by his son Liam and daughter Dylan, by six siblings: Robert, Kevin (Meg), Richard (Annabelle), Jeanne (Chris), Tricia (Scot), Lynne (Brian), and by many beloved nieces and nephews, cherished relatives and lifelong friends. Mass of the Resurrection will be held at 10:00AM on Friday, September 17, 2021, at Sacred Heart Church, 417 Broadway, Dobbs Ferry. Visiting will be held from 2:00pm to 4:00pm and from 7:00pm to 9:00pm with Family Eulogies beginning at 7:30pm on Thursday, September 16, 2021, at Edwards-Dowdle Funeral Home, 64 Ashford Ave, Dobbs Ferry.

Thomas Patrick McLoone Tom McLoone, who lived his life to the fullest and had a vivacious spirit, charisma, and wit, died suddenly and unexpectedly September 12, 2021. He was 66. Born Thomas Patrick McLoone on December 25, 1954 at St. Catherine&#8217;s... View Obituary & Service Information

The family of Thomas Patrick McLoone created this Life Tributes page to make it easy to share your memories.

Tom McLoone, who lived his life to the...

Send flowers to the McLoone family.