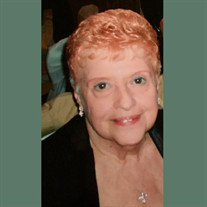 It is with deep sadness and broken hearts that the family of Vilma M. Troise announce her passing on April 5, 2020, it was Palm Sunday. Vilma was 92 years strong. Born on December 21, 1927, she was the baby of (7) children and an early Christmas gift for her entire family especially Mom and Dad, Michelina (Maggie) Romaglia Troise and Angelo James Troise. Vilma was named after a movie star of the 1920’s but was Baptized as Filomena, January 1928. On September 30, 1951 Vilma married Anthony J. Lento Sr. and together they had (5) five children. Michele (Lento) Bonelli, Lynda (Lento) Maranino, Anthony J. Lento Jr., and their pride and joy the twins, James Angelo Lento and Joseph Samuel Lento. Many years later Vilma was blessed with in-law children whom she loved and respected, John Bonelli, Nicholas (Nicky) Maranino, Donna Lento and Karen Biehl. Vilma’s blessings continued as each of her precious grandchildren were born, then later adding in-law grands to her life and oh how she adored them all…Stephen (Jean), Brianne (Joey Who), Diara (Eric M.), Ashley (Joey P.), Joseph, Nicholas (Kiersten), Lynda (Eric K.) Matthew L, Matthew G. (Louie), Kayla (Anthony). Vilma was a true homebody and dedicated her life to caring for her home and family. She was a cleaning fanatic-our home was impeccable and to dad’s dismay she asked him to paint every other month while she re-decorated each and every room. But more than her homemaker skills, Vilma was an outstanding cook! We will forever miss her Sunday dinners and her amazing Meatballs!!! Vilma came from a musical family. She loved to sing and had a pretty voice. Her favorites were Jerry Vale, Perry Como, Frank Sinatra, Dean Martin and then along came Engelbert Humperdinck and Tom Jones…we can still hear the music filling the rooms. Over the years Vilma often spoke with pride of her brothers’ musical talent and passed that talent on to her sons. She was so very proud of each of them and enjoyed watching and listening to them perform. Once Vilma’s family had grown she went to work as an EKG technician at the HIP Center, Bronx New York. Vilma truly enjoyed all the years she spent at the HIP Center and worked there until her retirement in 1992. In 2002, after spending her entire life in the Bronx, Vilma moved to Dobbs Ferry, New York to be closer to family. Though she was concerned that it would be a difficult adjustment-she rose to the occasion filling her days with family and watching her grandchildren grow up, going off to colleges and medical schools, then marrying and blessing her with 16 great grandbabies. They were the Joy of her existence…she would want them named… Stephen, Catherine, Vincent, Lucy, Alaina Lyn, Christopher, John, Aurora, Juliette, Anthony, Amelia, Joseph, Sadie, Macy, Madalyn and Eden! Last but never least, Vilma was a devout Catholic and a spiritual woman. She prayed the rosary and watched the mass on TV every single day in her later years-lighting candles and asking God to watch over all of us. Vilma was pre-deceased by her parents, Maggie and Jim and her six siblings, ‘brother dear’ Joe, Anthony, the twins-Tony and Rocky, then Millie, and Dorothy. She would always tell stories of each of them and how much she missed them. Vilma was unique...a woman never shy to speak her mind…a woman some may not have always understood but through it all she was our great protector. Mommy, Grandma, GiGi we will miss you forever and always. We pray that you are flying free with all those who went before you and even from heaven we know that you are watching over us-you are now our guardian angel from above. till we meet again…we will always be your devoted and LOVING Big Italian Family!!!

It is with deep sadness and broken hearts that the family of Vilma M. Troise announce her passing on April 5, 2020, it was Palm Sunday. Vilma was 92 years strong. Born on December 21, 1927, she was the baby of (7) children and an early... View Obituary & Service Information

The family of Vilma Marie Troise created this Life Tributes page to make it easy to share your memories.

It is with deep sadness and broken hearts that the family of...

Send flowers to the Troise family.