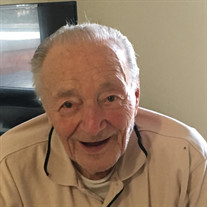 Vladimir Jagr, a devoted family man and dear friend reunited with his loving Savior on Friday, June 14th, 2019 at the age of 97. Vladimir was born to Marie Novotna and Frantisek Jagr in the small, Czech town of Mestec Kralove on July 21, 1921. In spite of his humble beginnings and being immersed in the atrocities of World War II, Vladimir was determined to better his life in the pursuit of freedom. In 1947, just two years after the war's end, he took his first steps by escaping Czechoslovakia through the German border. He resided in a refugee camp for a few years, however his journey did not end there. After saving up enough money, on January 2, 1952 he finally left for his future home and dream destination: America. Vladimir endured the long, rigorous voyage via boat until he finally set foot on the iconic Ellis Island. However, even though his dream was in motion, there were still many obstacles he had to overcome. As if it wasn't challenging enough starting a new life in a new country, Vladimir arrived with literally nothing but a few coins in his pocket-- he had no English, no family, no job, no money and no place to stay. Yet, despite it all, through the strength of his faith and his trademark persistence, Vladimir was resolved to move forward. Suffering from a hip deformity, he interviewed for a position as a hospital janitor where he masked his limp by using a broom as a crutch. From there, he became a trained X-ray technician, developed a keen eye for real estate and became the proprietor of the Lincoln Rest Home. Although he did epitomize the American dream, he was more than just his story. He was a true lover of Christ, a proud patriot and the pillar of his family. Even though he started alone in the United States, he built an amazing family who loved him every step of the way. He left this earth with many wonderful memories of his five kids, nine grandchildren and three great grandchildren! He raised his family to be humble, hardworking and, most importantly, to love and remember the Lord. Even during his time in the hospital, he would reserve his prayers for his loved ones and assured them that God is always working. Vladimir is survived by his five children, Barbara and husband Lee, Nancy, Scott and wife Gina, Kenneth and Edgardo, his nine grandchildren, Breanne and husband Steve, Kevan and wife Beatriz, Ryan, Scott, Cassidy, Jaret, Nikolet, Carlee and Jenna, and his three great grandchildren, Matthew, Dylan and Elizabeth. Vladimir's viewing and service will be held on June 18th, 2019 at Christ Alive Church at 600 Secor Road in Hartsdale. The viewing will be from 10am-12pm, followed by the funeral service at 12pm.

Vladimir Jagr, a devoted family man and dear friend reunited with his loving Savior on Friday, June 14th, 2019 at the age of 97. Vladimir was born to Marie Novotna and Frantisek Jagr in the small, Czech town of Mestec Kralove on July 21, 1921.... View Obituary & Service Information

The family of Mr Vladimir Jagr created this Life Tributes page to make it easy to share your memories.

Send flowers to the Jagr family.