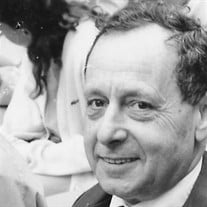 Werner Karl Maas, a long time resident of Hastings-on-Hudson, died on Tuesday, November 19, 2019. Werner, a professor at NYU Medical School, had a long and distinguished career in research. He was interested in how genes determine who we are. Werner was born in 1921 in Kaiserslautern, Germany. He came to the United States in 1936. After arriving in the United States, he studied at Cherry Lawn and then at Harvard. He received his PhD from Columbia in 1948. After several years as a researcher at the University of Wisconsin and CalTech, Werner took a position at NYU Medical School in 1954. In 1960, Werner met Renata Diringer, a fellow researcher. It was love at first sight, and after 3 weeks, Werner and Renata married. After 4 years, their first son was born, followed 18 months later by another son. A daughter arrived in 1968. Werner moved to Villard Ave in Hastings in 1968 and lived there until his death. He adored living in Hastings and never seriously considered several prestigious job offers because it would have meant moving. The factors that attracted Werner to Hastings were the camaraderie and conversations amongst commuters, the ability to go for walks in the woods and along the aqueduct and the sense of a small village arising from small owner operated businesses on Warburton. During his career, Werner focussed on understanding the function of regulatory genes, namely the genes that govern the activity of other genes. He published numerous articles during his career. He also served on an ad-hoc committee in Washington that oversaw regulation of genetic engineering from the late 1970s through the 1980s. He taught not only at NYU, but also at universities in Sao Paolo, Brazil and Zurich, Switzerland. Following his retirement, Werner focussed on writing. He published several histories of early research in microbiology and a biography of his father, a doctor in Germany. At the time of his death he was working on a collection of his thoughts about genes and how they influenced social development. He is survived by his wife, Renata; his three children: Peter, Andrew and Helen and 4 grandchildren: Max, Willa, Sophie and David. In lieu of flowers, memorial contributions may be made to: Hebrew Free Burial Association 125 Maiden Lane, Unit 5B New York, NY 10038 (212) 239-1662

Werner Karl Maas, a long time resident of Hastings-on-Hudson, died on Tuesday, November 19, 2019. Werner, a professor at NYU Medical School, had a long and distinguished career in research. He was interested in how genes determine who we are. Werner... View Obituary & Service Information

The family of Werner Karl Maas created this Life Tributes page to make it easy to share your memories.