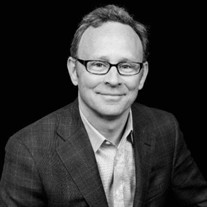 William Edward (Bill) Pence IV passed away at home on September 2, 2020, in the tender care of his family, at the age of 57 following a recent diagnosis of pancreaticobiliary cancer. Bill was born in Limestone, ME, and lived in Puerto Rico and Miami, FL before moving to Manassas, VA where he spent most of his childhood. He graduated in 1980 from Osborne High School, and in 1984 from the University of Virginia, where he obtained a B.S. in Physics with high distinction. He earned a Ph.D. in Electrical Engineering at Cornell University in 1989 with a thesis on VLSI packaging for high-speed digital computers. At the time of his death, Bill was a member of the Board of Directors of John Wiley and Sons and served as a consultant providing advisory services for incubator companies while also collaborating on the development of a startup company. He was the chair of a Cornell University College of Engineering Advisory Board, an alumni advisor for the University of Virginia Department of Media Studies, and a member of the board of the Bedford Historical Society. Throughout his career, Bill held numerous leadership positions in the technology, healthcare, and media industries. Prior to his retirement in 2017, as Chief Technology Officer of AOL, he led the company’s global technology strategy and was instrumental in the sale of the company to Verizon in 2015 and the acquisition of Yahoo in 2016. Between 2007 and 2014 he served as an Executive Vice President of WebMD in the role of Chief Operating Officer and Chief Technology Officer while the company was moving to mobile applications. Before joining WebMD, Bill was the Senior Vice President and Chief Technology Officer for Universal Music Group’s online initiatives and the PressPlay joint venture with Sony. The PressPlay venture served as the basis for the relaunched Napster, the world's first portable subscription streaming music service. Previously, Dr. Pence spent more than a decade at IBM, where he held various technology management positions in research as well as in the software and product divisions. He held ten U.S. Patents. Bill was continually learning, teaching, and mentoring, and found many opportunities to give back to the community. His continued self-education ranged from classes at the Culinary Arts Institute of America and research on building dry-stacked rock walls, to becoming DELE B2 certified fluent in Spanish. He was well-versed in history and enjoyed organizing the 240th anniversary reenactment of the Burning of Bedford last September. He conducted mock interviews for high school students and interviewed college applicants for Cornell University and the UVA Jefferson Scholarship. He was a mentor for young students and professionals and a confidant to his peers. Bill enjoyed teaching English as a second language at Neighbor's Link in Mount Kisco, NY, and traveling to the Dominican Republic on humanitarian trips with Bridges to Community. He was a member of the Bedford Presbyterian Church. Bill was predeceased by his father, William Edward Pence, III. He will be dearly missed and lovingly remembered by his wife of 27 years, Dr. Maria (Blasiak) Pence, their children, Beatrice and Henry of Bedford, NY; his mother, Peggy Ann (Will) Pence of Haymarket, VA, brother Scott Pence (Mary Ann) of Herndon, VA; his mother-in-law, Adele Blasiak of Camillus, NY, several brother and sisters-in-law, 20 nieces and nephews, and 13 great-nieces and nephews. Memorial donations may be made in Bill's name to Feeding Westchester (https://feedingwestchester.org/donation-page), the Rewarding Potential Scholarship (https://rewardingpotentialscholarship.org/supporting-the-scholarship/) or to the Bridges to Community/Bedford Presbyterian Church (https://bedfordpreschurch.org/bill-pence-memorial-fund/). Bill's memorial service can be viewed at https://www.dropbox.com/s/dwiy6jeotzl1ojh/BillPenceMemorialService.MP4?dl=0

William Edward (Bill) Pence IV passed away at home on September 2, 2020, in the tender care of his family, at the age of 57 following a recent diagnosis of pancreaticobiliary cancer. Bill was born in Limestone, ME, and lived in Puerto Rico... View Obituary & Service Information

The family of William Pence created this Life Tributes page to make it easy to share your memories.

Send flowers to the Pence family.